Poonam Pandey Denies Being Arrested for Lockdown Violation, Claims She Was On A Movie Marathon At Home When She Heard The News (Watch Video)

Poonam Pandey rubbishes reports of being arrested for Lockdown violation, says 'she was on a movie marathon at home and is perfectly fine.' Check it out. 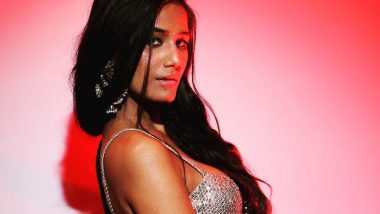 It was last night (May 10) when news of hottie, Poonam Pandey being arrested by Mumbai Police made it to the web. According to reports, the actress landed in trouble as she had violated lockdown rules. Well, along with Pandey a man also was taken into the custody. Reportedly, the reason behind the legal action was said that the two were spotted driving a BMW car at Marine Drive. However, seems like there's more to the tale, as Poonam Pandey took to her Instagram and shared a video in which she can be seen rubbishing rumours of her being locked behind the bars. Poonam Pandey Arrested by Mumbai Police for Violating Lockdown Rules- Read Details.

In the clip shared by the actress, she can be seen addressing her fans that she was on a movie marathon last night and watched three back-to-back films. Further, she adds that she has been getting a lot of calls and also saw it in the news that she was arrested and there's no truth to the said reports. She can be seen saying that she is home perfectly fine. Umm, we wonder what's going on?  Shashi Tharoor Says He is 'Grateful' to Poonam Pandey For Appreciating His Hindi.

Check Out The Video Shared By Poonam Pandey Below:

Guys I heard I got arrested, While I was having a movie marathon last night.

As per earlier reports, senior police inspector Mrityunjay Hiremath had told PTI, "A case has been registered against Pandey and Sam Ahmad Bombay (46) under sections 269 (Negligent act likely to spread infection of disease dangerous to life) and 188 (Disobedience of order duly promulgated by public servant) of the Indian Penal Code (IPC) and under provisions of the National Disaster Act." Looks like this case is quite twisted. Stay tuned!

(The above story first appeared on LatestLY on May 11, 2020 06:57 PM IST. For more news and updates on politics, world, sports, entertainment and lifestyle, log on to our website latestly.com).