While Dharma may certainly have more bad luck than good when it comes making franchises from their own stable. they had much bigger successes in associating with other studios in making their franchise, be it Baahubali series or the Singham-verse (Dharma had backed Simmba and the latest Sooryavanshi). 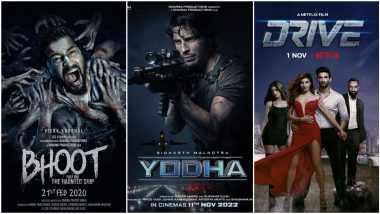 Maybe there should be a rule that you should never announce a franchise before your first film reaches the theatres. At least, Dharma Productions should have known this rule better, considering their own luck in kickstarting a franchise. On November 18, they announced their 'first' action franchise in Yodha. Starring Sidharth Malhotra (fresh off the acclaim he got for Shershaah) in the lead, Yodha is directed by Sagar Ambre and Pushkar Ojha. Going by the posters, it is reportedly a hijack thriller, and would also have two actresses in the lead. As per rumours, Disha Patani and Raashi Khanna have been zeroed in for those roles. Yodha: Sidharth Malhotra To Star in Dharma's Action Franchise; First Film To Release on November 11, 2022.

So far so great. Action movies have been a favourite among the Indian audience in these times, the successes of War, Uri and Sooryavanshi proof enough of that. We are hoping that Yodha would also get the formula right for the box office, and turn a hit, so that the franchise plans stay alive. 'Cos Karan Johar's production house has a rotten luck when it comes to having their own series.

Let's first talk about two prolific Dharma movies that, like Yodha, were announced with the intention of starting a franchise.

First would be the infamous Drive, directed by Tarun Mansukhani. The heist, thriller, starring late Sushant Singh Rajput and Jacqueline Fernandez in the lead, was to kickstart a franchise and the makers made their intentions clear when Drive went rolling.

Cut, a couple of years later and Drive turned out to be such a travesty in the making, that it was dumped on Netflix straight, while Sushant never even tried to promote the movie. Sushant Singh Rajput Upset with Drive Releasing on Netflix Adds a Special Clause in his Future Contracts.

Then let's talk about Bhoot – Part One: The Haunted Ship, the title itself suggesting that it was the first installment of a multi-film package. Directed by Bhanu Pratap Singh, the horror thriller had Vicky Kaushal in the lead role. It got decent reviews, but the film underperformed at the box office. Bhoot – Part One: The Haunted Ship released in 2019, we haven't got any announcement of yet, when the second movie will arrive, if it will. Bhoot Part One – The Haunted Ship Movie Review: Vicky Kaushal’s Horror Film Runs Out of Good Scares Before An Absurd Third Act.

These are the two released films of Dharma that didn't manage to kickstart a franchise as they intended to do when announced. Now let's talk about another film, the first of a planned trilogy, that has been in the making for some time. Yup, you guessed it right, Brahmastra! We went through demonetisation, an assembly election and two years of COVID-19 pandemic in the interim, but Brahmastra still continues to be in the making, that people are making jokes and memes on it. Brahmāstra: Alia Bhatt, Ranbir Kapoor’s Film Was Announced On This Day Back in 2014; Netizens Make Jokes on What They Were Doing When It Happened!

Since it is directed by Ayan Mukerji who gave us Wake Up Sid and Yeh Jawaani Hai Deewani, we have no doubt that this sci-fi fantasy saga would be a very good looking film. With a star-studded cast in Ranbir Kapoor, Alia Bhatt, Amitabh Bachchan, Akkineni Nagarjuna and Mouni Roy, with a rumoured cameo from Shah Rukh Khan, Brahmastra is bound to get a bumper opening at the box office. Unless Mukerji has taken these years to complete Brahmastra trilogy in one go, as Peter Jackson did with Lord of the Rings trilogy, the permutations and combinations to carry forward the franchise further - Karan said this was a franchise that would take 10 years in the making - would be difficult. Not unachievable though, if the studios actually backed on the plan, no matter when the first film arrives.

Now these are films that were already announced as the first of planned series or trilogy. Now let's talk about Dharma's other movies that they tried to turned into a franchise after the first movie was a hit.

First, there is Dostana. Tarun Mansukhani's 2008 romantic comedy starred Abhishek Bachchan, Priyanka Chopra (then not Jonas), John Abraham and Bobby Deol, and was a runaway hit at the box office. The makers were happy with the success of the film and planned to continue it into a sequel, which might retain John and Abhishek, with two other new stars. Since then, Tarun has been trying to get the script right, but it never went beyond the writing board. In the end, Tarun was dropped from the project and he went on to make another franchise-starter in Drive, and we now know how it turned out. Drive: 10 WTF Moments in Sushant Singh Rajput, Jacqueline Fernandez’s Netflix Film That We Still Can’t Get Over With.

Karan, however, didn't drop his plan to make Dostana 2, and in 2019, he announced the sequel with a new cast in Kartik Aaryan, Jhanvi Kapoor and newcomer Laksh Lalwani, and a new director in Collin D'Cunha. Finally, we had a Dostana sequel in the making, and nothing could possibly go wrong now. Right?

The return of the franchise with unlimited madness! @TheAaryanKartik, #Janhvi & a soon to be launched fresh face - making it the trio for #Dostana2, directed by @CollinDcunha. Watch out for the third suitable boy!@apoorvamehta18 @dharmamovies pic.twitter.com/XtpSHGMUrv

Well, it turns out Fate, or rather some egos had other plans here. Thanks to COVID-19, the shooting got delayed. Then aa few months back, a scandal happened when Kartik Aaryan and Karan Johar had a fallout, following which the former was blacklisted from any project of Dharma's. Kartik moved on to other projects, but Dostana 2 is yet to get a replacement for him and the film is in a state of stasis since then. Kartik Aaryan Sacked From Dostana 2; His Fans Slam Karan Johar As They Don't Buy 'Unprofessional Behaviour' As the Reason.

Dharma had two 'success' exceptions to their unfortunate saga when it comes sequels of their own. One is that of Karan Johar's own Student of the Year. Released in 2012 and launching the careers of Sidharth Malhotra, Alia Bhatt and Varun Dhawan, Student of the Year was a success at the box office. Then in 2019 came a standalone sequel in Student of the Year 2, featuring a different cast (Tiger Shroff, Ananya Panday, Tara Sutaria) and director (Puneet Malhotra).

Student of the Year 2 can take pride in the fact that it was the only title-retaining sequel from Dharma's stable to reach the theatres. It was decent at the box office, however, it didn't receive the same critical reception as the predecessor, nor it did it make the same kind of business. The continuation of the franchise ahead is still a question mark, as of now. Student of the Year 2 Movie Review: Tiger Shroff, Ananya Panday and Tara Sutaria’s Film Is All About Good Looks, Good Looks, Good Looks (and Some Flying)!

Fans can also point out that Badrinath Ki Dulhania, considered as a spiritual sequel to 2014's Humpty Sharma Ki Dulhania, was a big hit, and I would agree with that. However, apart from sharing the same director and two main leads in Alia Bhatt and Varun Dhawan, Badrinath Ki Dulhania is a very much different film from HSKD. Still, let's give the studio some credit here!

While Dharma may certainly have more bad luck than good when it comes making franchises from their own stable. they had much bigger successes in associating with other studios in making their franchise, be it Baahubali series or the Singham-verse (Dharma had backed Simmba and the latest Sooryavanshi). Sooryavanshi Box Office Collection Day 12: Akshay Kumar Starrer Continues To Perform Strong, Stands At A Total Of Rs 159.65 Crore.

Interestingly, the most successful franchises in Bollywood, be it Dhoom, Munna Bhai series, Krrish, Singham-verse, Tiger-verse - were never intended to begin off as such, till the first film went on to do major profits at the box office. It's like testing the waters with a single boat first, before you release the entire fleet. Let's hope that with Yodha, Dharma Productions change the luck for the industry and for itself and give a successful start to an entertaining franchise.

(The above story first appeared on LatestLY on Nov 18, 2021 02:58 PM IST. For more news and updates on politics, world, sports, entertainment and lifestyle, log on to our website latestly.com).