Friends The Reunion: Did You Know That DC Comics Once Paid Tribute to the Sitcom Via Legionnaires #60?

Friends The Reunion is here and on the occasion of the same, here's a time when DC comics paid a tribute to the iconic sextet's, Yes, that did happen, check it out. 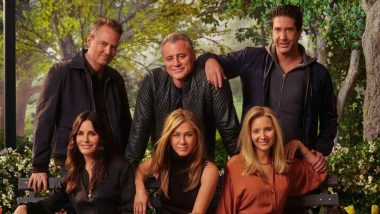 Friends: The Reunion is here! The moment every FRIENDS fan was waiting for has finally arrived as Monica, Phoebe, Chandler, Ross, Rachel, and Joey are back to the central perk. The buzz around the special episode is immense wherein netizens can't keep calm. While the world is binge-watching the unscripted episode, we bumped into an old trivia that has FRIENDS connection with DC comics. Yus, don't get shocked, as the sextet did (kinda) appear in the pages of the comics. Friends The Reunion: Here's Why BTS Gets To be Part of The Sitcom Special Elite Guest List.

For the unware, FRIENDS was a hit show then and is also relevant in today's times. The show ran for 10 seasons and also won numerous awards. But quite surprisingly, DC comics has once paid tribute to the sitcom in Legionnaires #60. The scene from the book sees six pals talking about Durlan shapeshifters where their world is divided into two different alien races. The group of Legionnaires are not an exact replica of the FRIENDS characters, but they do slightly resemble them with a few changes made here and there. Friends: The Reunion Review – The Episode Is Going to Make You Cry Happy Tears, Critics Give a Thumbs Up to the Special.

So here's a little fun trivia : the characters from F.R.I.E.N.D.S (a version) technically exist in the DC world.

In DC comics Legionnaires #60, we can see Chandler, Ross, Rachel, Monica, Phoebe and Joey with small changes in metropolis. pic.twitter.com/CpuYgMN8LR

After looking at this, we must say, that Superheroes and Friends amalgamation is blending in quite well. Who knew that this even existed, right? Meanwhile, HBO Max is going to air the reunion for the USA peeps, whereas for Indians it's ZEE5 that's premiering the iconic show. Stay tuned!

(The above story first appeared on LatestLY on May 27, 2021 03:32 PM IST. For more news and updates on politics, world, sports, entertainment and lifestyle, log on to our website latestly.com).