Red Notice is a comic-action thriller written and directed by Rawson Marshall Thurber. The movie stars Dwayne Johnson, Ryan Reynolds and Gal Gadot in the lead, while Ritu Arya and Chris Diamantopoulos are in the supporting cast. Red Notice is streaming on Netflix after a limited theatrical release. 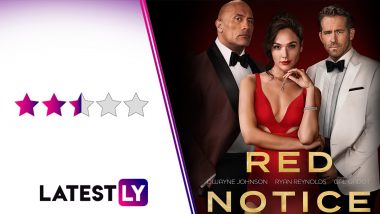 Red Notice Movie Review: It takes a very bland screenplay to bring three of the world's charming actors together and then not eke out much of their inherent charm into the movie. That's the feeling I got when I watched Red Notice, one of Netflix's most ambitious offerings which is also its most casual. Directed by Rawson Marshall Thurber of Central Intelligence and Skyscraper, the director brings in the attractive scope and scale of his previous offerings and also the dullness of his scripts here. Red Notice Movie Review: Dwayne Johnson, Ryan Reynolds, Gal Gadot's Thriller Doesn't Win Over Critics.

In Red Notice, we are introduced to the lore of Cleopatra's three eggs... no, not those ones.... three bejewelled eggs gifted to her by her lover, Mark Anthony. Two of the eggs make it to modern times, while the existence of the third egg is unknown. And it is reuniting these three eggs that brings together our three principal characters, though most of the screentime, it is two against one.

So FBI profiler John Hartley (Dwayne Johnson) has to reluctantly team up with the high-profile art thief Nolan Booth (Ryan Reynolds), when he lands in the same jail cell as Booth (whom he had put there in the first place). Hartley wants to take down the mysterious Bishop (Gal Gadot) who erased his identity and got him arrested, so that she can rob all the three eggs, while Booth wants to retain his title of being the world's best thief. Sparks occasionally fly, there are are some explosions and more tired 'couple' jokes and Gal Gadot looking smoking-hot whenever she blesses us with an appearance on the screen.

Red Notice is the kind of film that is so attractive, right from its casting to its fun packaging, that you can't hardly wait to watch the movie whenever it is scheduled to arrive. And when it does, you wonder how, where and why did all those gas disappear. Red Notice isn't a bad film. It has its moments, mostly because we love to see the three actors riff each other off, something we have seen them do past so many times. The making is polished and the globe-trotting adventures of its protagonists allows some nice visuals worth watching if you have a 4k TV.

That's about it, though.

For otherwise, Red Notice comes across as this mish-mash of the greatest hits, that don't necessarily belong to the band we see here. As the film moves from one setpiece to another, I couldn't help but tick off movies that Red Notice kept reminding me of. From Raiders of the Lost Ark (Booth even hums its theme music at a point) to National Treasure, to Fast & Furious series to even Jumanji and Jungle Cruise and The Rundown (seriously, The Rock's obsessions with jungle-based adventure movies deserve a feature of its own), you can find the inspirations glaring on your face. OTT Releases of the Week: KayKay Menon’s Special Ops 1.5 and Nivin Pauly’s Kanakam Kaamini Kalaham on Disney+ Hotstar, Dwayne Johnson’s Red Notice on Netflix & More.

Even if we keep the lack of originality to the side -  I come from the land of Bollywood so it is easy for me - I was more annoyed that how generic and, shockingly dull, the movie felt in many of its parts, which is a crime when you have The Rock, Deadpool and Wonder Woman in the mix. You don't really care much for their characters, something Army of Thieves managed to do otherwise a couple of weeks back despite its familiar setting, and therefore most of the emotional beats felt low (didn't Reynolds did the disappointing 'dad' trope a few weeks back in The Hitman's Wife's Bodyguard?). The action sequences are slickly choreographed - the best fight scene when Bishop takes on both Hartley and Booth was already spoilt in the pre-release promotions - but the hazy editing takes away much of the impact.

I was also a little disappointed that Gal Gadot, who was easily the sassiest and the best among the trio, had lesser screentime than the other two. It's like sticking to the adage - Good things come in small packages. Ryan Reynolds and Dwayne Johnson are their usual, repetitive selves.

The third act has a couple of big twists, that could either be seen as mind-shattering or mind-insulting. My opinion went towards the latter.

PS: The director also seems to be a big fan of cheesy Bollywood flicks like Tashan and Khakee, just saying!

- A Couple of Slick Sequences

- Usual Beats with Usual Performances from The Rock and Reynolds

Keep your expectations at bay, and Red Notice could be at best be a mildly enjoyable affair for you, especially if you are a fan of either or all of its three main stars. It is sassy in parts, but not sexy enough - a travesty when you see how good-looking Johnson, Reynolds and Gadot look together on screen. Red Notice is streaming on Netflix.

(The above story first appeared on LatestLY on Nov 11, 2021 02:45 PM IST. For more news and updates on politics, world, sports, entertainment and lifestyle, log on to our website latestly.com).