Gosling plays many of his roles in a very stoic and reserved way. That’s what sets his characters apart from his peers on screen. Gosling has a great sense of how to stand apart in a film and make it special. 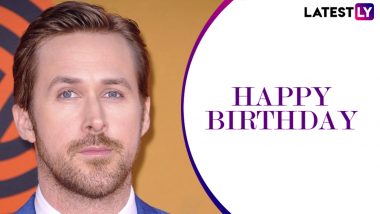 Ryan Gosling is one of Canada’s finest and has constantly proved himself to be a great actor. Originally starting off by starring in Romcoms, Gosling quickly proved that he is just more than just a pretty face. Recently his career has revolved more around serious roles and taking on characters with extreme depth. Gosling has come far from being that guy who just used to star in romantic films. Ryan Gosling Is in Talks To Feature As Ken Opposite Margot Robbie in Greta Gerwig’s Barbie Movie.

His projects are so diverse and exciting that it is always a treat to watch them. Gosling plays many of his roles in a very stoic and reserved way. That’s what sets his characters apart from his peers on screen. Gosling has a great sense of how to stand apart in a film and make it special. So to celebrate Ryan Gosling’s 41st birthday, we are taking a look at five of his best films that are unmissable.

Ryan Reynolds portrays Neil Armstrong in The First Man that depicts humanity’s first journey to the Moon. He portrays the real life legend very personally and gives a performance that will surely tug at a few heart strings. It’s some of his most impressive character work yet and the film depicts the human cost of this mission very well.

In Drive, Gosling portrays a Hollywood stuntman who secretly is a getaway driver as well. His life quickly turns upside down when he ends up helping his neighbour and finds himself in deep trouble. Drive might seem like an action thriller on surface, but it is much more than that.

La La Land is a fantastic musical that follows two individuals who fall in love while trying to make it big in Los Angeles. Ryan Gosling and Emma Stone share a great chemistry on screen and it is what drives La La Land forward. La La Land also has a very mature take on romance which makes it such a special and unique romcom.

Honestly, Blade Runner 2049 has no right being as good as it is. It’s one of the best high concept sci-fi films that we have received in a while. A Blade Runner named K goes on a journey to find Rick Deckard, a former Blade Runner who has been missing for 30 years. It’s a story about finding what exactly makes someone a human and what it feels like to find yourself.

Ryan Gosling is a really impressive talent and we can’t wait to see where he goes from here. Whatever his next release might be, I will be damn sure to be there first. With this we finish off the list and wish Ryan Gosling a very happy birthday.

(The above story first appeared on LatestLY on Nov 12, 2021 09:20 AM IST. For more news and updates on politics, world, sports, entertainment and lifestyle, log on to our website latestly.com).