Code M season 2 is a perfect binge watch series for those who love thrill and Indian Army. Code M season 2 to stream on Voot Select from June 10. It stars Jennifer Winget, Tanuj Virwani and Swanand Kirkire in key roles. 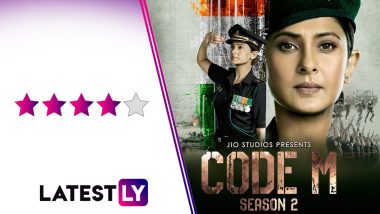 Code M season 2 review: Major Monica Mehra is back. Jennifer Winget's debut in the digital world with the first season was much appreciated. While fans loved the twists in the tale, Winget's performance wowed them. It was good to see her in such a challenging role after her many TV dramas. The second season attempts to tell a different story and manages to be as promising as the original. Code M Review: Jennifer Winget As A Military Lawyer Is At Her Finest In Unmasking The Indian Army Secrets.

While Monica's personal life is chaotic, professionally, she has landed a sensational case. Somebody from inside the Indian Army is trying to expose corruption in the system by going on a killing spree. Monica saves the Chief Minister's life but given the high profile nature of the case, it gets transferred to CBI's Qureshi (Swanand Kirkire). Monica doesn't have a good feeling about him, so she continues to investigate the case on her own. What she unearths will leave everyone in shock.

Code M's biggest win is how it handles action scenes. They are smart, clean and gives you a rush. Jennifer gets the moves just right and at times, it's such a good feeling to see a woman throw punches at the bad guys rather than whimpering at a corner to waiting to be saved. The scenes are designed well and there's no over-exaggeration at all. They are neatly shot and placed in the narrative so that whenever they occur, you feel all excited for it.

As like the first season, the twists are very nicely written and planted in the narrative to get maximum reaction. The mid-season big reveal will definitely leave you surprised... we are pretty sure you never saw that coming!

While the series keeps you hooked, the background music plays a bit of spoilsport at times. It overpowers the dialogue so much that at times they aren't even audible. Code M Season 2: Ektaa Kapoor, Jennifer Winget, Tanuj Virwani Spills the Beans on the Voot Select Show.

Performances are good with Jennifer doing a swell job in the stunt scenes. Although we would have loved to see more action from her, Jennifer shines whenever she gets into the Major mode. Tanuj Virwani is decent and so is Swanand Kirkire.

Code M season 2 is a perfect binge watch series for those who love thrills and respect the valour of the Indian Army, and loved the first season. Code M season 2 to stream on Voot Select from June 10.

(The above story first appeared on LatestLY on Jun 09, 2022 12:31 PM IST. For more news and updates on politics, world, sports, entertainment and lifestyle, log on to our website latestly.com).