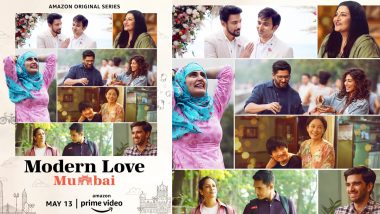 Prime Video on Monday announced that Modern Love Mumbai, the first of the three localised Indian versions of the widely acclaimed international series, will premiere on May 13. The Mumbai chapter of the loved US original anthology series Modern Love, helmed by John Carney, has brought together six filmmakers—Vishal Bhardwaj, Hansal Mehta, Shonali Bose, Dhruv Sehgal, Alankrita Shrivastava and Nupur Asthana. Produced by Pritish Nandy Communications, the new Amazon Original series will feature six heart-warming stories about "discovering and exploring love in all its shades and emotions". Modern Love Indian Adaptation in Works at Amazon! Kit Harington, Anne Hathaway’s Show to Be Made in Three Indian Languages.

Aparna Purohit, Head of India Originals, Amazon Prime Video said, "Modern Love Mumbai" features a bouquet of "heart-warming, lyrical stories that explore love in its many forms". "And together all the stories represent a unique love affair with the poly-cultural city of Mumbai. We are certain that these stories will add hope, humour and some sunshine into your lives. "We are happy that Modern Love Mumbai further solidifies our long-standing relationship with our producers, Pritish Nandy Communications," Purohit said in a statement.

Inspired by the famous New York Times column, the anthology will showcase "soul-stirring and uplifting stories that are rooted in the heart of the city of Mumbai". Pritish Nandy, producer, Pritish Nandy Communications, said the anthology "beautifully negotiates through the different shades of love that Mumbai, the city of dreams, throws up and celebrates". "I am confident that every story in this anthology series will tug at and win the audiences' hearts. Like they say, love makes the world go round and it's been our absolute pleasure to partner with Amazon, John Carney and the New York Times in bringing to India these stories of every day love with every day people in a whole new normal kind of celebration," he said. The other local adaptations of the series include Modern Love: Chennai and Modern Love: Hyderabad.