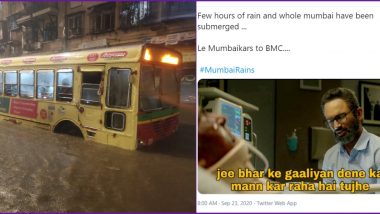 Mumbaikars woke up to a rainy weather after the city was lashed with heavy rainfall and thundering since last night. The instant reactions with pictures, sharing videos of the waterlogged streets have been shared on Twitter. #MumbaiRains is among the top trends on Twitter this morning and it would be incomplete without set of funny memes and jokes that are now a regular. Every time the city experiences heavy showers, Mumbaikars have their share of fun online by sharing jokes about Mumbai Rains. When at the early start of the month, the city experienced severe thundering, netizens tweeted funny memes and jokes asking if Thor was here!

The Indian Meteorological Department (IMD) has predicted generally cloudy sky with heavy rainfall in Mumbai for Wednesday, September 23. The severe waterlogging in several regions across the city has also halted the city's lifeline- railway services. Central and Harbour line transport has been affected due to the heavy rainfall, the services are thus cancelled. It used to be a joyous moment for every citizen or students who would enjoy the day off as railway services would be shut. Now people are enjoying the weather from indoors and giving others a glimpse of the situation in their areas via pics and videos.

#Mumbairains dont go out stay at home. Condition of cotton green station. Every roads are like this. pic.twitter.com/6Mul6yg0F8

More Pics of The Situation

Few hours of rain and whole mumbai have been submerged ...

Lightning in Some Parts

Whenever it rains heavily and water logging, Mumbaikars be like #MumbaiRains pic.twitter.com/ASazNPTnDG

Railway has announced suspension of Train services between CST - THANE......

There are many such videos and pictures of waterlogged streets after heavy pouring since last night. At 5:30am today, Colaba recorded 122.2mm of rainfall and Santacruz 273.6mm. The city has received intense spells of rains throughout the night and a yellow alert has been issued for Mumbai and Thane regions. We would advise all citizens to stay safe and not venture out unless necessary.

(The above story first appeared on LatestLY on Sep 23, 2020 08:41 AM IST. For more news and updates on politics, world, sports, entertainment and lifestyle, log on to our website latestly.com).