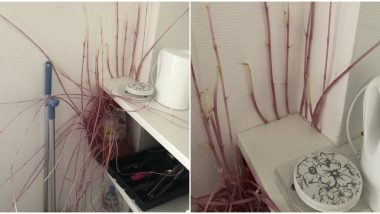 In this lockdown imposition around the world, we have seen numerous instances of animals and birds taking over places. But ever imagined veggies growing out into monsters? That would seem straight out of a nightmarish movie, but something like this came true for a French woman. Donna Porée, from Caen, went away to her boyfriend during the lockdown and forgot about the potatoes she had got from the supermarket. When she returned back home after three months, she was horrified at the sight in her kitchen. The potatoes had grown red tentacles that made it look like a monster. She has posted the pictures on Twitter and they will give you nightmares too! Viral Video of Mysterious Black Creature is Reminding People of Venom; Know More About Bootlace Worm, One of The Longest Animals on Earth.

Pore resident in the town of L'Aigle purchased a bag of potatoes from a local store back in March. But when the pandemic came, she left her house in a hurry and went to her boyfriend to spend time in quarantine together. She took her stuff but forgot about the potatoes that lay under the kitchen shelf. And in three months, the potatoes had grown tentacles and taken over her flat! The offshoots of the potato look like an alien with the pink tendrils on the kitchen wall and surfaces. WTF! New Jersey Man Dating a Ghost Says She's Cheating on Him During Lockdown.

So scary! What would you do if you found something like this in your home? Thankfully, it was veggie and not some monstrous creature, although it looks like one! As she wrote in her caption, "the potatoes decided to push without limit until making holes in the joints." She also commented that she nearly got a heart attack when she saw it at first. Well, we wouldn't blame her. And now you know that if you are ever leaving your home for a long time, then take care of your veggies too!

(The above story first appeared on LatestLY on Jul 04, 2020 02:15 PM IST. For more news and updates on politics, world, sports, entertainment and lifestyle, log on to our website latestly.com).