Shirley Temple was one of the most popular actors in the American film industry. Let us know about 5 interesting facts about the famous curly-haired child star. 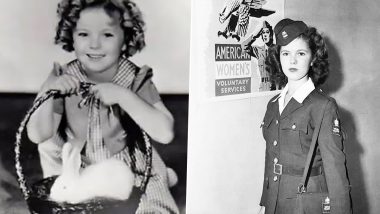 Shirley Jane Temple was not only the biggest American star; she was also a singer, dancer, and diplomat. She was born on April 23, 1928, in Santa Monica, California. At the tender age of three, she began dance classes. In 1934, with the musical film ‘Stand Up And Cheer’ she had stunned the nation. She was also very popular for her blonde ringlet curls and signature dimples. In 1934, she had starred in several films alone, including ‘Bright Eyes’ in which she sung the famous song ‘On The Good Ship Lollipop.’

Shirley was one of the most popular actors in the American film industry even before she reached the double digits in age. She became the first child star to receive an Academy Award just at the age of six years. From 1935 until 1938, she was the country’s top box office draw; she even beat out Bing Crosby, Joan Crawford, and Clark Gable, to name a few. With films such as 1935's ‘The Littlest Rebel’ and ‘Curly Top’, she had saved 20th Century Fox from bankruptcy. The American Film Institute ranked Temple as No. 18 among its top 25 actresses in 1999. On February 10, 2014, the curly-haired child star passed away at the age of 85.

Now, on June 9, 2021, Google honoured Shirley Temple with a cute doodle as, on this day in 2015, the Santa Monica History Museum opened “Love, Shirley Temple,” a special exhibit featuring a collection of her rare memorabilia. And thus, here we have listed out five interesting facts about the biggest American child star, Shirley Temple.

According to The New York Times, in 1932, when Temple was just 4-years-old, she was spotted by an agent, who chose her to be a part of the popular collective series ‘Baby Burlesks’, which the famous newspaper described as “a series of sexually suggestive one-reel shorts in which children played all the roles.”

According to People magazine, Temple’s mother Gertrude would coil her hair into 56 perfect pin curls every night. Then Temple used to read the next day’s script as a bedtime story. However, in the morning, Shirley used to memorize everyone’s lines, including her own.

When Temple was turning 9, the studio celebrated her 8th birthday as they wanted her to be younger. However, Shirley received more than 135,000 presents from around the world.

In 1939, when Temple was singing ‘Silent Night’ on a live radio show, a woman tried to assassinate her under the logic that the 10-year-old star had swiped her daughter’s soul.

Temple’s first marriage with Agar was not blissful. Talking about the same, she once told, “I was 17, I was way too young. He was 24. But they didn’t talk about alcohol then. It was something you hid… So we didn’t talk about it.” Later, she enjoyed a great relationship with California businessman Charles Alden Black, who never saw any of her films. Their marriage lasted from 1950 until his death in 2005 at age 86.

(The above story first appeared on LatestLY on Jun 09, 2021 09:41 AM IST. For more news and updates on politics, world, sports, entertainment and lifestyle, log on to our website latestly.com).