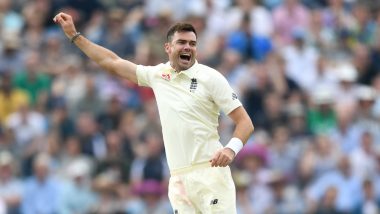 James Anderson has dismissed his retirement speculations and has expressed his desire to play the Ashes 2021-22. The England pacer had earlier called a virtual press conference and it was speculated that the cricketer might end his career as he has been struggling pick wickets lately. "No absolutely not. I am still hungry to play the game. The frustration for me has been after one bad game, the whispers that go around. I don't think that's fair,” Anderson said during a virtual press conference while dismissing retirement rumours. Joe Root Says Maximising Careers of Stuart Broad and James Anderson Really Important.

"It's been a frustrating week for me personally because I have not bowled very well, I felt out of rhythm "Probably for the first time in ten years, I got a little bit emotional on the field, started getting frustrated, let that get to me a little bit. When you get frustrated and a little bit angry, you try and bowl quicker and quicker. That doesn't help on the field,” the pacer added.

Anderson also said that he be “trying to work really hard the next couple of days, try to figure out of there are any technical issues.” “Hope that I get the nod for the next game and I can try and show people I have still got what it takes to play Test cricket,” he added.

Anderson further said: “to be honest, coming into this game I felt good, but during the game there was something off - the rhythm wasn't quite there. As I went through the game I just tried to start bowling quicker, run in faster, bowled a couple of no-balls which isn't like me really. It felt like I was trying a bit too hard. Ben Stokes to Miss Remaining England vs Pakistan Test Matches Due to Family Reasons.

"I was chatting to Chris Silverwood and Pop Welch about some basics, making sure my action is where I want it to be and finding that timing. Hopefully I can continue this week and keep my fingers crossed that the captain and coach keep faith with me for the next game.

"I think also I didn't feel like I bowled poorly in the West Indies series. I felt good with the way the ball was coming out, and don't think too much changes with one bad game. Everyone has a bad game, I'm sure I will have more bad games. It's trying to keep a positive mental attitude, focus on the next game, put everything else behind. When you play well you can't dwell on that either, you have to put it behind and focus on what's coming up.”

"As I said, it was one bad game and I'm sure I'll have another bad game in my career. I just don't want every time I have a bad game for there to be whispers going round that I'm going to pack in. For me it's about trying to find a way of dealing with that, dealing with the outside noise. I've done that really well in my career, but it's a little bit different now.” Pakistan Can Still Win Test Series Against England Despite Manchester Loss, Says Inzamam-Ul-Haq.

Anderson has so far played Tests for England and has picked 590 wickets. He needs ten more wickets to become the first pacer to reach 600 wickets. Only three spinners have achieved the feat in Test cricket and they are Muttiah Muralitharan, Shane Warne and Anil Kumble.

(The above story first appeared on LatestLY on Aug 10, 2020 03:28 PM IST. For more news and updates on politics, world, sports, entertainment and lifestyle, log on to our website latestly.com).