England vs Croatia, UEFA EURO 2020 Live Streaming Online & Match Time in IST: How to Get Live Telecast of ENG vs CRO on TV & Free Football Score Updates in India

2018 World Cup semi-finalists England and Croatia clash at the iconic Wembley Stadium in their opening European Championship match. Under the management of Gareth Southgate, the Three Lions have improved considerably and turned into world-beaters. 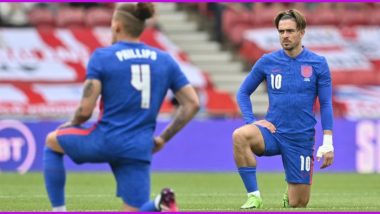 2018 World Cup semi-finalists England and Croatia clash at the iconic Wembley Stadium in their opening European Championship match. Under the management of Gareth Southgate, the Three Lions have improved considerably and turned into world-beaters. His faith in the youth has paid rich dividends and now the former Middlesbrough gaffer will look to go all the way with the Three Lions. Opponents Croatia have been on the downhill ever since making it to the finals of the last World Cup. They are an ageing team with several key players at the twilight of their international career. Skipper Luka Modric speaking ahead of the match said England playing at home is unfair advantage to them and that certainly has stoke some fire in the contest. Euro 2020: Belgium Defender Timothy Castagne Ruled Out Due To Head Injury.

Declan Rice and Kalvin Phillips make up the midfield partnership for England in the absence of Jordan Henderson. Mason Mount will be given a free role as an attacking midfielder and should slot in behind skipper Harry Kane, who is a key figure in attack. Marcus Rashford and Raheem Sterling are blessed with raw pace and they could stretch Croatia’s backline throughout the game. John Stones had a brilliant season with Manchester City and is without a doubt the leader in the backline. Euro 2020 Day 3 Schedule: Today's Match With Kick-Off Time in IST, Upcoming Fixtures.

Croatia are relying heavily on their talismanic skipper Luka Modric to provide the goods on the big stage. With Ivan Rakitic bidding goodbye to international football, it will down to Marcelo Brozovic and Matteo Kovacic to handle the midfield operations. Ante Rebic and Ivan Perisic on the wings have the capability to go past England’s full backs with ease and Andrej Kramaric will expect good services from this duo in the attacking third.

When is England vs Croatia, UEFA EURO 2020 Match? Date, Time and Venue Details

Sony Pictures Networks India is the official broadcaster of UEFA EURO 2020 in India. It will broadcast England vs Croatia live match on Sony Ten 2 in English, Sony Ten 3 in Hindi, Sony Ten 4 in Tamil and Telugu, Sony Six in Bengali and Malayalam.

The live online streaming of England vs Croatia, UEFA EURO 2020 football match will be available on the SONY LIV app and website. JIO TV users can also catch the live action of the game on its app. Croatia have quality in every department but England at the moment are playing at a different level and should claim all three points.

(The above story first appeared on LatestLY on Jun 13, 2021 03:11 PM IST. For more news and updates on politics, world, sports, entertainment and lifestyle, log on to our website latestly.com).