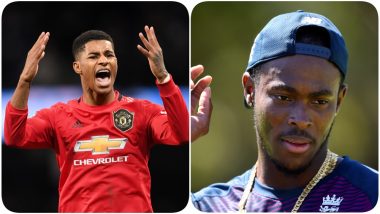 Jofra Archer is on a cloud nine after his scans are cleared and will be joining the England cricket team for the upcoming tour of West Indies. Archer was suffering from an elbow injury and hs regained his fitness. The good news was shared on social media and Marcus Rashford responded to the news and called him a "Big Man." The Manchester United player has been friends with Archer for a long time now and the two support each other on various social causes too. Obviously the two follow each other on social media too and now responded to the clear scans. Marcus Rashford Calls Jofra Archer 'National Hero' After The English All-Rounder Faces Racial Insults During Test Match in New Zealand.

England will play three-match Test Series alongside West Indies. The games will be played behind closed doors in the absence of fans. The first match will begin from July 8, 2020, and will be held at the Rose Bowl Cricket Ground. Meanwhile, Rashford is expected to be featured in the playing XI for Manchester United against Tottenham Hotspurs. The match will be held at the backyard of the Hotspurs.

(The above story first appeared on LatestLY on Jun 19, 2020 09:48 PM IST. For more news and updates on politics, world, sports, entertainment and lifestyle, log on to our website latestly.com).