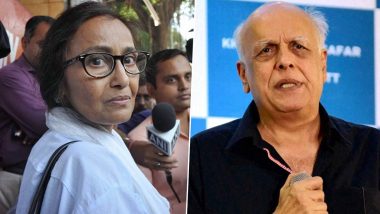 Rabia Khan, the mother of late actress Jiah Khan, says filmmaker Mahesh Bhatt is a mouthpiece of Bollywood mafia. She has also claimed that Bhatt once threatened her. Jiah was found dead at her Mumbai residence in June 2013. Her family accused Sooraj Pancholi, Jiah's then boyfriend, for her death. About Jiah being declared depressed, Rabia told India Today Television: "Who said it? Except Mahesh Bhatt? At my daughter's funeral, he came to me and said that Jiah was depressed. Jiah Khan’s Mother Makes Shocking Revelations How Salman Khan Tried Influencing CBI Probe and Supported Sooraj Pancholi

I said, 'Excuse me sir. She was never depressed.' He told me, 'Tum chup ho jaao varna tumhe bhi injection deke sula denge' (You shut up, else you too will be put to sleep with an injection)." Earlier, Rabia had shared a post on social media demanding a CBI probe into the ongoing Sushant Singh Rajput death case. Jiah Khan’s Mother Rabia Khan Condoles Sushant Singh Rajput’s Death, Says ‘Bollywood Has to Change’

Talking about Mahesh Bhatt being vocal about Sushant's mental health, she said: "He is a mouthpiece of Bollywood mafia. He knows nothing. He is so pathetic that I have no words to express. He was intimidating when my daughter worked for him at the age of 16. He told me to leave her alone. How could I leave her alone? I will speak for justice. I will tell the world what these people are."

(The above story first appeared on LatestLY on Aug 15, 2020 01:29 PM IST. For more news and updates on politics, world, sports, entertainment and lifestyle, log on to our website latestly.com).