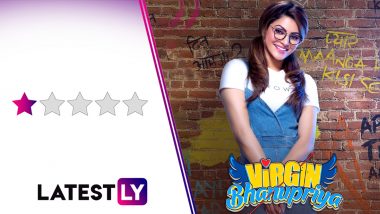 Virgin Bhanupriya Movie Review: In 2005, Steve Carell starred in the hit comedy The 40-Year-Old Virgin, that was about, as the title says, a man who is still a virgin even at forty. Virgin Bhanupriya, the new film on Zee5, doesn't have anything common with the Hollywood film, apart from the fact that both their protagonists are trying to drop their virginity tags. But Virgin Bhanupriya, directed by Ajay Lohan, is so humourless, so crass that even a misogynistic The 40-Year-Old Virgin deserves an apology from me for even thinking about it while watching this travesty. Virgin Bhanupriya: Gautam Gulati Reveals The Urvashi Rautela Film Is Based on Real-Life Experience of Director Ajay Lohan.

Bhanupriya (Urvashi Rautela) is desperate to lose her virginity. She is a college student, who wears spectacles to indicate she is geek, and geeks can't have sex, right? She has a loudmouth, sex-crazed BFF Rukul (Rumana Molla), whose advice on helping her lose her virginity is as pointless as Sanjay Manjrekar's commentary. Apparently, in their world, sex is the only thing that rules, and when you don't have an option to do so, you go for marriage.

At home, things aren't easy for Bhanupriya, with her parents (Rajiv Gupta and Archana Puran Singh) having separated but still fight with each other. When they come face to face, they roast each other so much, as if they are waiting for Arnab to invite them to his Republic panel. With the kind of racist digs they use at each other, he should roll a red carpet for them. Is Urvashi Rautela’s Virgin Bhanupriya Inspired by Emma Stone’s 2010 Movie Easy A?

Watch The Trailer of Virgin Bhanupriya:

Alas, the inanities don't end here. Bhanu finds out that her astronomy charts are her biggest enemy - apparently, sex is not something in her fate. To fix that, she first tries to hook up with Rajiv (Sumit Gulati), whose lack of height and speech disability are fodder to more crass jokes, as expected. Then there is Shartiya (Gautam Gulati) a beefed-up ruffian with a penchant for not losing bets, whose abs make Bhanu go weak in her knees. None of these two tracks leads to anything good. Except that libraries are makeout hotspots (something Friends showed years back). Or drinking spurious alcohol leads to a hospital bed. Or that I should have stopped watching the film, right there and then when Rukul tells Bhanu that she is on a toilet and nothing is going out of her stomach. Even the toilet humour sucks!

I trudged along to find the main characters take a pointless Goa detour, and cringe on the movie seeing waste the talents of an actor like Brijendra Kala.

Towards the end, we see a character trying to inspire his penis to wake up. I yawned, as I wanted to remind the film that Saket Chaudhary's Pyaar Ke Side Effects did the same joke more than a decade ago. Don't mind the below-the-belt humour, but at least make them original please! Or funny, at least!

(The above story first appeared on LatestLY on Jul 16, 2020 06:45 PM IST. For more news and updates on politics, world, sports, entertainment and lifestyle, log on to our website latestly.com).