While Colin Farrell's early career had him appear in some duds, in the past few years he has made himself an exquisite actor. So to celebrate this amazing Irish actor’s 45th birthday, we are taking a look at five of his best-rated movies, according to Rotten Tomatoes. 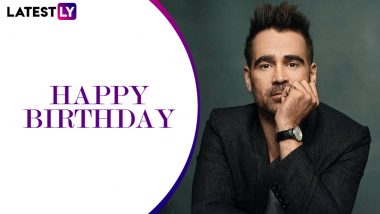 Probably one of the most interesting actors in Hollywood, Colin Farrell has had quite an interesting career. Jumping onto the Hollywood scene, he was the hottest young actor, but then he went on to establish himself as one of the best actors working today. His career has seen many roles by him where he makes a compelling lead and a compelling supporting actor as well, and it shows his amazing range as an actor. While his early career had him appear in some duds, in the past few years he has made himself an exquisite actor. So to celebrate this amazing Irish actor’s 45th birthday, we are taking a look at five of his best-rated movies, according to Rotten Tomatoes. Friends: From Brooklyn Nine-Nine to The Big Bang Theory, 5 More Shows To Watch if You Are a Fan of the Sitcom (LatestLY Exclusive).

This 2008 black comedy crime film, see's Farrell team up with director Martin McDonaugh. Farrell co-stars alongside Brendan Gleeson where they both star as two Irish hitmen, who have to go into hiding to save themselves. The film received positive reviews upon release and was even nominated for the Academy Award for Best Original Screenplay.

Directed by Yorgos Lanthimos, this black comedy sees Farrell play the role of David. In the film, single people are given 45 days to find romantic partners or otherwise they will be turned into an animal of their own choice. As bizarre it sounds, the film is genuinely very entertaining and its bizarreness is amazingly pulled off by Farrell. Godzilla vs Kong Movie Review: An Epic Monster Bash Dragged Down by a Disjointed Plot (LatestLY Exclusive).

This science fiction action film sees Farrell team up with one of Hollywood’s biggest directors, Steven Spielberg while co-starring alongside Hollywood’s biggest action star, Tom Cruise.Minority report is set in the year 2054, where PreCrime, a specialized police department, apprehends criminals based on foreknowledge provided by physics called “precogs”. Collin plays the role of Danny Witwer, a government agent pursuing John Anderton played by Cruise. This sci-fi epic is filled with amazing action, and is a movie you mustn’t miss.

This drama film directed by Scott Cooper sees Jeff Bridges play a washed up country singer who tries to turn his life around after starting a relationship with a young journalist played by Maggie Gyllenhaal. Colin Farrell plays the role of Tommy Sweet who is an old collaborator of Jeff’s character. The film received critical acclaim upon release and was praised for its story and the acting that it presented.

Farrell collaborated with director Steve McQueen, in this crime thriller. The plot follows four Chicago women who attempt to steal $5,000,000 from the home of a politician to pay back a crime boss from whom $2,000,000 was stolen by their husbands before they were killed in a botched getaway attempt.  Farrell plays a corrupt politician who is involved in the robbery as well, the film is truly gripping and tense.

(The above story first appeared on LatestLY on May 31, 2021 09:20 AM IST. For more news and updates on politics, world, sports, entertainment and lifestyle, log on to our website latestly.com).