Indian classical vocalist Pandit Jasraj died on Monday in New York. He was 90 years old. Pandit Jasraj’s career spanned over 80 years. He was a recipient of many prestigious awards, including Padma Shri, Padma Bhushan and Padma Vibhushan. 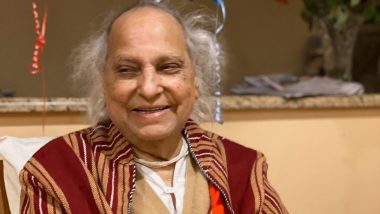 The Indian music maestro was born on January 30, 1930, in Hisar district of Haryana. He was initiated into vocal music by his father, and later trained as a tabla accompanist under his elder brother.

Padma Vibhushan Pandit Jasraj passes away in New Jersey, US at the age of 90 pic.twitter.com/NlJFJzhF7W

Pandit Jasraj began training as a vocalist at the age of 14. He had also worked to popularise semi-classical musical styles, such as Haveli Sangeet.

(The above story first appeared on LatestLY on Aug 17, 2020 06:46 PM IST. For more news and updates on politics, world, sports, entertainment and lifestyle, log on to our website latestly.com).