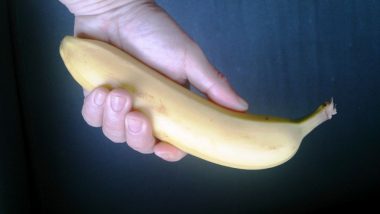 Nothing but 39 little magnetic balls inside the penis via the urethra! Can you believe it? A  "curious" 12-year-old was unable to pee after he inserted a string of small metal, magnetic balls into his penis. The X-ray images showed magnets were inside his private part in the shape of 'U'. The image will give you pain!

Jet spray is no longer just used to clean up. This  22-year-old Mumbai man was brought to the doctors at Bhabha Hospital after he was admitted with a jet spray stuck in his rectum. Although, he said that he "accidentally inserting the jet spray into his anus", mind you,  10 inches deep!

Urethral sounding cases 101! Chinese teenager was hospitalised after his curiosity made him shove USB cord into his urethra. A 13-year old boy from Linkou China decided to experiment with a USB cord. He inserted the 20 cms into his penis, only to realise that he couldn’t remove it.

Man Shoved Eggplant In To His Anus

While this incident wasn't a result of "sexual curiosity" it still is important to know that you must not play with your private parts. Doctors at a Chinese hospital had the shock of their lives when they had to save a patient who tried to cure constipation by inserting an eggplant up his anus.

Sexual kink gone wildly wrong! The 40-year-old man asked his wife to insert air-freshener can into his rear. He had to be hospitalised and undergo immediate surgery when the sex game went horribly wrong and a can of air freshener was stuck in his bottom!

How far would you go to enhance your sexual abilities? This man used sexual stimulant used for bulls! He had to be rushed to the hospital after he chose to take a sexual stimulant meant for breeding bulls for improving his sexual life. He was left with a three-day erection.

A Thai man took the pain to make this weird DIY sex toy out of metal pipe and socks and then of being rushed to the hospital when he could relieve his penis out. In the failed attempt of making a DIY sex toy a 21-year-old Thai man ended up rotting his penis. Soon the made-at-home toy got stuck on his penis and despite using several lubricants to free himself, he was not able to get his penis out of it.

(The above story first appeared on LatestLY on Jun 06, 2020 03:04 PM IST. For more news and updates on politics, world, sports, entertainment and lifestyle, log on to our website latestly.com).