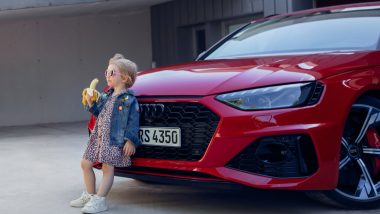 A little girl eating a banana in front of an Audi car—what could go wrong with the ad campaign? Plenty, opined Twitter users after the picture was shared by the German automobile manufacturer. The ad photo shows a little girl, peeling a banana and eating the fruit, while posing in the front of the car. It divided netizens across social media. While a few did not find anything wrong with the ad, others called it ‘insensitive’ and ‘provocative.’ Following public outcry online, the firm apologised in a series of tweets, admitting that it was ‘insensitive,’ and reported that it withdrew the ad, and now investigating how the ad came to be published.

The German carmaker posted the advert for the Audi RS4. “Lets your heart beat faster - in every aspect,” reads the slogan above the image. The ad quickly drew criticism from people on social media. Some pointed out that the girl is in a ‘dangerous position,’ as the driver would not be able to see the child in that pose, leaning on the grille. Again, others said that the image was insensitive, and sexually suggestive, as bananas and sports cars have often been seen as symbols of male lust. “Little girl with phallic symbol in her hand,” one person responded to the tweet. 2020 Audi RS7 Sportback Launched in India at Rs 1.94 Crore; Check Prices, Features, Variants & Specifications.

Lets your heart beat faster – in every aspect. #AudiRS4 pic.twitter.com/14XaKhlRVL

After the pic drew criticism online, Audi apologised, admitting that the ad was ‘insensitive’ and promising that it will never be repeated in the future again. Through a series of tweets, the company explained its stand, adding that it would examine how the campaign had been created.

Audi Apologises Over the Ad Campaign:

We hear you and let’s get this straight: We care for children. The Audi RS 4 is a family car with more than thirty driver assistance systems including an emergency break system. That’s why we showcased it with various family members for the campaign. (1/3) pic.twitter.com/XAeIjszUWQ

The Company Admitted it Was A 'Mistake'

We hoped we could convey these messages, showing that even for the weakest traffic participants it is possible to relaxingly lean on the RS technology. That was a mistake! Audi never intended to hurt anyone’s feelings. (2/3)

Audi Will Examine the Campaign

We sincerely apologize for this insensitive image and ensure that it will not be used in future. We will also immediately examine internally, how this campaign has been created and if control mechanisms failed in this case. (3/3)

The German company is not the only first automaker to stumble with clueless ads. In May, this year, the German car giant Volkswagen, owner of Audi, became embroiled in a similar social media row. In 2013, Hyundai had to apologise after a UK ad reportedly implied the emissions in their cars were so tiny that no one would be able to commit suicide in them.

(The above story first appeared on LatestLY on Aug 06, 2020 05:23 PM IST. For more news and updates on politics, world, sports, entertainment and lifestyle, log on to our website latestly.com).