Remember the confused girl meme, a black girl holding her hand awkwardly in a questioning pose? She's all grown up and has revealed that she was the face behind it all. Named Nabria Jackson, she recreated the iconic meme pose and shared it on Twitter, where it is going viral once again. 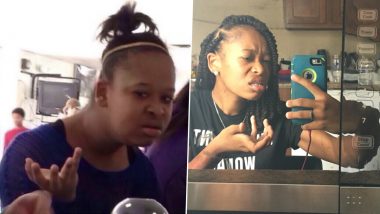 The internet has become a source of entertainment thanks to the numerous memes and jokes that come up online everyday. Every few days, we have new meme formats coming in, and the ones from the years ago that still come up on our timelines. And the meme origin tales are interesting too. Remember the confused girl meme, a black girl holding her hand awkwardly in a questioning pose? She's all grown up and has revealed that she was the face behind it all. Named Nabria Jackson, she recreated the iconic meme pose and shared it on Twitter, where it is going viral once again. Nabria has also explained what was the story behind that face of hers, which has now become of the most popular memes on the internet. Vibing Cat Meme Origin Explained: Know All About The Viral Funny Meme Video of Cat Vibing on Song 'Ievan Polkka' Sung by Turkish Musician Bilal Göregen (Watch His Videos).

Nabria Jackson (@JacksonNabria) took to Twitter to share a set of three pictures and wrote, "my meme is officially 8 years old". She shared the meme picture, recreated the same pose and another one selfie of herself online. People on the internet went crazy to see how even the meme had aged and some shared their favourite memes too. When one user asked what was the story behind this expression, she wrote in the comments, "Girl they was throwing food & I was just mad... the girl kept calling my name & as I said what I made that face." People on the internet are calling her a legend and sharing their memes of this picture. Last year, the origin of Binod meme had fascinated the internet.

The tweet has got over 7 lakh likes and more than 94,000 retweets in a couple of days. But the responses in the comments are funnier. Did you notice that the selfie is taken on the microwave mirror? That's also amusing the netizens. Check some replies:

Top 10 Gif of all time pic.twitter.com/F6h5aNdfyF

This had me tripping for a good minute 😭 pic.twitter.com/Dd68LNy5sI

i have been laughing for 6mins STRAIGHT pic.twitter.com/luD8Tai5It

While some doubt that the girl in the meme is actually Keisha Johnson and not Nabria. However, a little search on the internet reveals that a story about Keisha Johnson suing Instagram for using her embarrassing picture was actually a satire. It could be Nabria Jackson after all, what do you think? Well, now we know the story behind this 'meme' face. And if the meme origin tales fascinate you, then do share this one with your meme buddies.

(The above story first appeared on LatestLY on Jan 16, 2021 04:34 PM IST. For more news and updates on politics, world, sports, entertainment and lifestyle, log on to our website latestly.com).