AS Roma vs Juventus, Serie A 2020-21 Free Live Streaming Online & Match Time in IST: How to Get Live Telecast on TV & Football Score Updates in India? 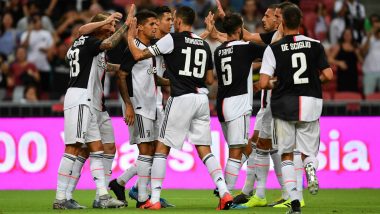 It is early days in the Italian Serie A but serial winners Juventus will be eager to make it back to back wins under new manager Andrea Pirlo when they meet AS Roma at the Olympic Stadium in Rome. The Bianconeri won their opening game 3-0 against Sampdoria without too many hiccups but the game in the Italian capital will pose a challenge. Although AS Roma crashed to a 3-0 defeat against Hellas Verona in their first game, they are a decent outfit, capable of producing the goods on their day. AS Roma versus Juventus will be telecasted on Sony Ten network from 12:15 am IST. Cristiano Ronaldo, Paulo Dybala & Dejan Kulusevki Included in the 23-Member Juventus Squad, Check Out Predicted Playing XI for ROM vs JUV (Watch Video).

Over the last two seasons, AS Roma have finished outside the top four which is a cause of worry for the fans. They were once a regular in the quarters of the UEFA Champions League campaign after the campaign but now those glory days are over. Manager Paulo Fonseca has some thinking to do ahead of the visit by the champions. Edin Dzeko once looked set to make a move to Juventus but the move has now stalled. He was left on the bench last week but could be given a start. Pedro and Henrikh Mkhitaryan on the wings will be assisted by action-packed midfielder Lorenzo Pellegrini. Paulo Dybala Joins Juventus After an Injury, Sweats it Out With Cristiano Ronaldo & Team Ahead of Serie A 2020-21 Game Against Roma (See Pics).

Federico Bernardeschi is out of the tie due to a thigh strain while Matthijs de Ligt continues to recover post his shoulder surgery. New signing Alvaro Morata should start on the bench after his move from Atletico Madrid. Cristiano Ronaldo is the talisman of the side and his contribution in terms of goals and movement is vital for this team. Adrian Ramsey and Aaron Ramsey looked rejuvenated in the game against Sampdoria and Andrea Pirlo will be hoping the duo can continue with the same.

When is AS Roma vs Juventus, Serie A 2020-21 Football Match? Know Date, Time and Venue

Where to Watch Live Telecast of AS Roma vs Juventus, Serie A 2020-21 Football Match?

Sony Sports Network are the official broadcasters of Serie A 2020-21in India. So fans can tune into Sony Ten 2 and Sony Ten 2HD channels to catch the live-action of AS Roma vs Juventus clash.

How to Get Free Live Streaming Online of AS Roma vs Juventus, Serie A 2020-21 Football Match?

AS Roma vs Juventus can be viewed online on OTT platform SonyLiv, the official streaming partner of Sony Sports Networks. So fans can tune into SonyLiv App or website to catch the live action of Serie A 2020-21matches. AS Roma have problems at the back and this is where Juventus will exploit them and secure an easy win.

(The above story first appeared on LatestLY on Sep 27, 2020 05:51 PM IST. For more news and updates on politics, world, sports, entertainment and lifestyle, log on to our website latestly.com).