Football At Olympics: A Look At Cristiano Ronaldo and Lionel Messi's Performances At Summer Games

Cristiano Ronaldo and Lionel Messi have previously represented their countries at the Olympics but at the same time with the Portuguese star taking part in the 2004 Olympics which were held in Athens while the Argentine has played at Beijing 2008. 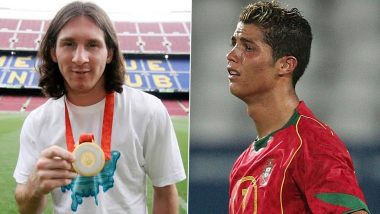 The men’s football tournament at Tokyo 2020 Olympics will kick off on July 22, 2021 (Thursday) with many young footballers looking to make their mark on the grandest stage. Though football is not played at the senior level at the multi-nation event, it provides a great platform for many aspiring footballers to showcase their skills. And two of the biggest footballers to take part in the Olympics were Lionel Messi and Cristiano Ronaldo and we take a look at their record. Lionel Messi, Neymar Jr, Sergio Aguero and Other Major Footballers With Olympic Gold.

Cristiano Ronaldo and Lionel Messi have previously represented their countries at the Olympics but at the same time with the Portuguese star taking part in the 2004 Olympics which were held in Athens while the Argentine has played at Beijing 2008. Football At 2020 Tokyo Olympics: Brazil, Spain, Argentina & 22-Man Squads Of Other Team's At Summer Games.

Lionel Messi and Cristiano Ronaldo are two of the greatest footballers of all time and have won every possible imaginable at the club level. However, the two players have very different records at the Olympics with the Argentine winning the completion in 2008 while the Portuguese superstar had a poor outing in 2004. Is Lionel Messi Playing At 2020 Tokyo Olympics? Check Complete Argentina Squad For Men's Football Tournament At Summer Games.

Cristiano Ronaldo’s Record At The Olympics

A 19-year-old Cristiano Ronaldo represented Portugal at the 2004 Athens Olympics but wasn’t able to inspire his team out of the group stages as they finished at the bottom of their group, winning just one of three matches with him scoring just one goal.

Lionel Messi played at the 2008 Beijing Olympics and had a stellar time with Argentine winning the gold medal for the second consecutive time at the Summer Games. Messi played a crucial role, scoring two goals en route to Albiceleste’s triumph.

(The above story first appeared on LatestLY on Jul 21, 2021 04:59 PM IST. For more news and updates on politics, world, sports, entertainment and lifestyle, log on to our website latestly.com).