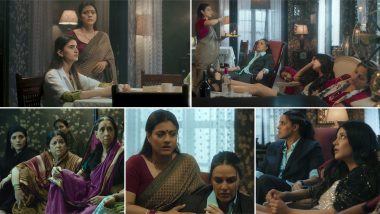 The first trailer of the upcoming short film, Devi, has dropped on the internet. The introductory footage is brief but intriguing. It doesn't spill any details about the plot other than the simple one-liner that 9 women, connected somehow, maybe by the same thread, are trapped in one room. They are all not the same. They are from different religions and different socio-economic backgrounds. They are not scared. They are complaining about how hot it is getting inside. One even finds time to worship. But the viewer can sense that underneath these trivial small-talks lies something more serious. Devious, even.

The 9  women are played by a stellar cast of actresses of all ages. Kajol seems to be leading the pack, although reluctantly. She is reunited with her Helicopter Eela co-star Neha Dhupia here. Neha plays a businesswoman. She appears without any makeup. "F**k you, Mausi", she screams at one point. Then there is Shruti Haasan, after a long time on screen. She is dressed to party. Neena Kulkarni, Mukta Barve, Sandhya Mhatre, Rama Joshi, Shivani Raghuvanshi, and Yashaswini Dayama make up for the rest of the cast.

Watch The Trailer of Devi Here:

Devi trailer is unusual, as first looks should be. Aren't you tired of trailers giving away the best scenes from the movies and sometimes even the climax of the film? The money shot from the recently released film, Panga, was there in the trailer. The final twist of Malang was also flaunted in the trailer. In times like these, the trailer for Devi brings its A-game to the table, without divulging details. That is how it should be.

The short film will be released on the internet on March 2, 2020. Devi has been directed by Priyanka Banerjee. We'd be keeping a reminder on for this one. Looking forward.

(The above story first appeared on LatestLY on Feb 24, 2020 04:03 PM IST. For more news and updates on politics, world, sports, entertainment and lifestyle, log on to our website latestly.com).