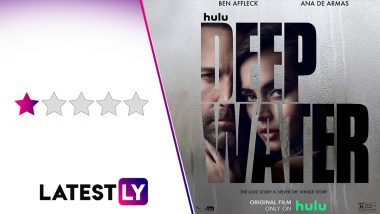 Deep Water Movie Review: I don’t know how many of you all reading this have watched Gone Girl, but if you have, then you would know how that movie showcases a dysfunctional relationship and takes its time with developing it (coincidentally it also stars Ben Affleck). The story there is presented in a way where every decision of the character makes sense, and it really lends itself to being logical. Deep Water is similar with its story where it presents a dysfunctional relationship, but everything is executed in the worst way possible. Deep Water: Ben Affleck and Ana de Armas’ Erotic Thriller To Stream in India From March 18 on Amazon Prime Video (Watch Trailer).

There is a lot to get into over here so I will focus on the positives first. Lil Rel Howery (Grant) is the one good part about this movie. He is the comedic relief, and I think it really works to give some personality to a rather dull film. He does great with what he is given, and presents a nice set of levity.

Ben Affleck also is good in the movie, but then again this is a role for him that he can easily nail. Playing a very similar character in Gone Girl as well (minus the controlling aspects), Affleck really nails the character down to a T, even if the writing leaves more to be desired. That’s all the good I can say about this movie, other than that, it is a bland mishap of preposterous levels.

Deep Water like I said focuses on a dysfunctional relationship, but the only thing that is dysfunctional over here is the script. It lacks any sense of charm or even tension to it. You have this couple over here that are in a loveless marriage, with the wife going out every night with a different guy and the husband being jealous about it, that’s literally what the story is. Of course a lot of stuff goes down later on, but to boil it down, this is the plot.

The ending of it as well doesn’t make any sense where you don’t know what was going through the writers mind while making this. Which is surprising considering Sam Levinson of Euphoria fame was involved here.

De Armas in particular has one of the weakest performances in the movie, or even her career. She overacts rather than trying to be subtle, and that unfortunately ruins her performance. It also doesn’t help that she has to deliver some of the worst dialogues in the film.

Talking about dialogues, there is not a single memorable line. Every dialogue delivered here feels like someone’s bare understanding of what a dysfunctional relationship might be like. The “dirty” talk as well in the film is so unbelievably cringe inducing where I didn’t know if they were trying to be sexy or just downright funny. The Batman Movie Review: Matt Reeves & Robert Pattinson Deliver the Definitive Version of DC’s Dark Knight! (LatestLY Exclusive).

The supporting cast tries to add some interest to the film, but even then, they can’t seem to uplift this already sinking ship. Director Adrian Lyne returns to directing a film after 20 years, and you would expect him to at least have a basic knowledge of how to handle scenes, but even then he ultimately fails.

(The above story first appeared on LatestLY on Mar 16, 2022 05:54 PM IST. For more news and updates on politics, world, sports, entertainment and lifestyle, log on to our website latestly.com).