The global Telegu community will celebrate the Gidugu Venkata Ramamurthy's 157th birth anniversary on Saturday, i.e August 29. Ramamurthy is considered to be one of the earliest modern Telugu linguists and social visionaries during British rule. 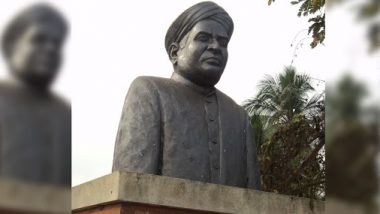 The global Telegu community will celebrate the Gidugu Venkata Ramamurthy's 157th birth anniversary on Saturday, i.e August 29. Ramamurthy is considered to be one of the earliest modern Telugu linguists and social visionaries during British rule. The renowned Telegu writer is known for championing the cause of using a language comprehensible to the common man ‘Vyavaharika Bhasha’ against the scholastic language ‘Grandhika Bhasha’.

Born on August 29, 1863, at Parvatalapeta in Srikakulam near Vamsadhara River, Ramamurthy lost his father when he was just 12-years-old. For his initial education, he studied privately and passed his matriculation. Later, Ramamurthy began his life as a teacher in Gajapati Maharaja School in Parlakimidi -- now in Gajapati district of Odisha. Telugu Language Day 2020: Know About Date, History And Significance of The Day Observed to Highlight The Importance of The South Indian Language.

After struggling to read ‘Sasanas’ on stone tablets for years, Ramamurthy managed to study various language scripts and wrote books on languages and scripts. Ramamurthy was the first person to give a social base to Telugu literature and rendered services to the tribals in Savaras in Parlakimidi. Not only he worked for the development of tribal languages, but he also gave 'Savara' language a script and prepared lexicons.

Since the language of Sasanas was loaded with Sanskrit diction of the kavyas, Ramamurthy worked tirelessly to make kavya bhasha comprehensible. Being an eminent language visionary, Ramamurthy recognised the primacy of oracy and the efficacy of the accepted 'direct method' of language teaching. With patience and perseverance, Ramamurthy used the press, publications, public platform, social discourse, and even pamphleteering to promote Sishta Vyavaharika -- standard, current, and spoken language.

Due to Ramamurthy's consistent efforts, Andhra Sahitya Parshat in Kakinada withdrew from the fight in 1924. Later in 1933, under the chairmanship of Chilukuri Narayana Rao Pantulu, Abhinavandhra Kavi Panditasabha resolved that modern Vyavaharika must be the medium of instruction.

Among Ramamurthy's best works include Kalinga (Orissa) Charitra, Sora-English dictionary, Savara Patalu and lexicons for the ‘Savara’ people. Ramamurthy was conferred the title of 'Rao Saheb' and 'Kaisar-i-Hind Medal' by the British government. The Telugu Language Day is celebrated on his birthday August 29.

(The above story first appeared on LatestLY on Aug 29, 2020 08:15 AM IST. For more news and updates on politics, world, sports, entertainment and lifestyle, log on to our website latestly.com).